They did not cover this in graduate school: “Now, what do you need these funnels for?” Me, deadpan, “Have you heard of climate change?” Thus began an interesting but ultimately unsuccessful conversation with a big box store clerk.

Another thing I did not learn in graduate school: I am reaching for the top of a t-post, balancing next to a gopher hole on a steep grassy slope, squinting into the sunlight, and figuring out what my hands are telling me about the state of the sensor wires above my head. They disappear into a solar shield and I know there is a problem with the wire somewhere. Meanwhile, the searing heat of the ground on my boots, so early in the spring, is telling me something about the slope I’m standing on, and why I have found no live seedlings here.

I am studying microclimate and plant establishment in the foothills and montane areas of the Sierra Nevada and Tehachapi Mountains in California. What I do on a daily basis draws from both my hands-on fieldwork experience and my ability to notice and describe important factors as a biologist. The project I work on also relies on the knowledge and hard work of hydrologists, biogeographers and others to fully understand the patterns of establishment of our plant study species. But the data for the whole team begins where our boots hit the ground. And I love it.

On a recent excursion our first challenge is the forecast: on the eve of the trip, I learned that the atmospheric low that had promised to come in later in the week is going to come in smack-dab when I’ll be driving roads that get “sketchy” when they are wet. I’m working on Tejon Ranch land, together with Jason, a local biologist. We have 32 field hours to download 270 sensors, 12 weather stations, and census up to 500 seedlings (if we can), and I know I’m going to lose a day to the weather.

Since we have a day or so before the weather comes in, we cruise straight out in my boss’s Nissan 4×4. Our goal for the day is to download all of the microclimate sensors at several of the foothill “common garden” plots. We’ve planted 5 foothill and montane tree species into exclosures at 12 different locations at this site. We’re learning that the south-facing gardens are a tough place for seedlings (even hardy drought-tolerant species), especially during a drought.

Temperature data loggers with funnels shielding the thermocouples at 5cm above the ground.

“Now, what do you need these funnels for?” UV radiation is also a harsh deal for plastic in the foothills, and particularly so on an exposed slope. One of the first things we notice is that our radiation-blocking solar shields are smashed at our south-facing garden. Nearly all of them. Jason quips, “last fall, I said I ‘pity the fool’ who has to come out and deal with these sensors in the spring!” We laugh, since we are the unfortunate fools. Replacing these shields involves undoing the stabilizing steel wires, prying the stopper out of the plastic, getting the wires back into a new funnel, and reassembling it. All this has to happen while practically laying on the ground, in sharp Bromus (grass) seed, reaching under a wire cage. Most sensors themselves are still working fine, so we’re relieved that we don’t have to fully disassemble the structures. We get to work.

Tejon Ranch is a neat place to work; a unique biodiverse area that encompasses several vegetation types and spans from the Mojave Desert on the Antelope Valley side, up over 6800’ then down to foothill oak woodland in the Central Valley to the north. Here, more than any other field site, we need to take special care to clean up all of the small plastic pieces, or microtrash, that we find around our sensors. The California condor, an iconic and endangered species, occurs here (in fact, on the last day of this excursion, I will sit and watch a condor cruise over my head). Microtrash creates a hazard for these birds, as, given the opportunity, they will bring pieces back to their nestlings, where it clogs the GI tract of the young birds. Condor biologists sometimes must empty the gullets of these nestlings so they can survive. 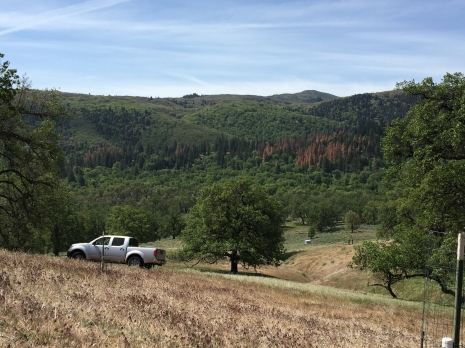 View from a south-facing common garden at a montane site on Tejon Ranch.

Over the next two days, we manage to replace funnel after funnel. It’s time they were replaced anyway. Although the data for those sensors cannot be used because of the damage, thankfully we’re catching these now, before the summer season, when we really want to measure ground-level temperature. However, we run out of funnels, and leading to the eventual, slightly absurd conversation with a store clerk, in an attempt to describe how this household item is used in scientific research.

As expected, Friday’s weather is poor and we need to wait for extra funnels to arrive. Fortunately, it’s a day we get to meet up with a new member of the collaborative team and we can show him around the field site on a few of the sturdier roads. He is a fire ecologist, working to predict wildfire, and ultimately gap occurrence on the landscape. Gaps are opportunities for our sun-loving study species to establish. He’s collecting fuel moisture samples to help parameterize their models.

Showing him around, we drive up and over the top of the ranch, getting a great look at the landscape, for which we hope to ultimately inform management. Due to the requirements of temperature and moisture for seedling establishment in conjunction with future conditions, these foothill woodland landscapes may not look the same in the future. If the foothill landscapes become drier, seedlings may begin to establish in areas that are further and further upward in elevation. However, there are existing species at these elevations that may not give up space. As we drive I imagine the shuffling and shifting that will occur with an upward trudge of species.

That’s why we’re hoping that the fire and disturbance modeling team can determine how gaps and opportunities for seedlings may occur in these landscapes.

In the end, I do need my extra day. I’m on my own, so GPS, SPOT unit, bear spray, orange vest and cell phone in tow, I trudge all over the field site, downloading and servicing our “landscape array” of sensors. With each wire I need to reshape, PVC capsule I need to deconstruct or sensor cage I need to repair, I know that I’m contributing to our knowledge of how microclimate influences the establishment of plants in heterogeneous environments, now and into the future. I hear the project principal investigator’s voice in my mind telling me, to “count each download as a success!” I know that the modeling team is already hard at work, and they’ll be happy that I’ve returned, a little exhausted, data in hand. 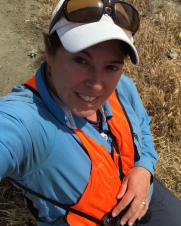 Lynn Sweet is an ecologist, working to understand establishment of plants in complex landscapes. She is from Maine and studied biology at Dickinson College, and plant biology at the University of California, Riverside (UCR). She credits her research career to her diverse field experiences before graduate school, from working in a forest insect lab to monitoring southwestern willow flycatcher nest sites. Since receiving her PhD at UCR, she has worked for the University of California, Santa Barbara on an interdisciplinary team on the field project described here, with the goal of better predicting future plant distribution. She is now a researcher with the Center for Conservation Biology at UCR studying ecosystems in the Colorado and Mojave Desert of California.