This week Dispatches from the field welcomes Arron Watson,  who conducted his masters by research in Entomology at the University of Reading. His summer project was to investigate how signal crayfish, an invasive species, has an impact on benthic invertebrate predation. He sampled 20 sites across the UK, 10 without signal crayfish, 10 with. He conducted this field work over a month in May and is telling us about his experiences here!

May 1st 2018: the first day of field work for my summer thesis, a key part of my MRes in entomology at the University of Reading. I had already spent roughly six months planning my field work, and decided that I wanted to start my freshwater exploration in Scotland. My supervisor from Buglife, Scotland is based in Stirling and he had offered to show me some advanced insect identification techniques. Next, I would drive over 1000 miles around the rest of the U.K. in my 1997 Nissan Micra (aka “the beast”), stopping over in a mix of locations including a hotel and the houses of friends I had met in my previous life as a back packer. 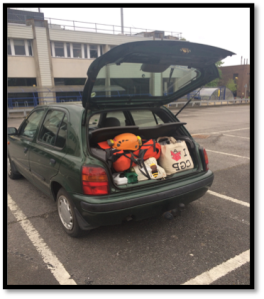 I left Reading at 6 am and headed north up the backbone of the country towards Scotland. I have lived in Reading for about 3 and half years now, so I have gotten used to the urban way of life. In Reading, I see buses much more often than I do trees or sheep. But driving along on a beautiful day with a wad of CDs was fantastic, and the closer I got to Scotland, the greener the landscape appeared and the more free I felt.

I met Craig (my supervisor) in Stirling. He suggested getting some rest after my 7 hour drive, then setting out first thing tomorrow for a set of four rivers to start my sampling. If you’ve never had the chance to “kick sample” before, it’s a lot of fun. It’s one of those things that takes you back to being younger: standing in the middle of a flowing river, dipping your net in, and waiting for living things to end up in there. When you remove the net from the river and you see lots of things wiggling about, you think, excellent!

After collecting the samples, the next step is to sort them. This is where the skill comes in: not only do you have to remove the things you don’t need (such as fish), you also need to identify things based on differences in morphology – without books, depending only on your memory. But Craig also told me just how many different stone flies and mayflies there are, and explained that I wouldn’t be able to tell them apart just by eye, so I should be strict if I thought I collected everything.

Luckily for me, I already had experience identifying terrestrial invertebrates, which was a huge advantage, so after a day’s training, I was a professional picker. Now my task was to collect samples from the rest of my sites, spread across the UK. I would spend the next 3 weeks having limited contact with anyone other than my hosts at each accommodation.

My next set of sites were on the Clyde river in Scotland. I was informed to take a letter with me to show any catchment officials or anglers I had permission to be there. I arrived at my first site and started to get a feel of what it was like to be in the middle (not literally) of Scotland. Water running fast, no one in sight, greenery everywhere: bliss! As I got to the edge of the riverbank to look at my first GPS location, I took a minute to stare at the flow of the river and thought, “Oh! Actually that looks like it’s flowing quite fast.” I looked around and realised I really was alone. This is where you start to build field work skills, I realized: no one to rely on, no one to ask, “do you think I will get swept down the stream?” – just your skills and intuition to rely on. After a moment of worry, I told myself, “OK, if I go down that river, I have my buoyancy aid and an inflatable bag which has my phone in it, so I suppose I would be noticed flying down the river like a game of ‘pooh sticks’” (look it up!). I used the pole of my kick sampling net (approximately 1m) to gauge the depth of the river, chose an area where the flow broke slightly, and stepped in. Within a short space of time I had picked my samples, and off I went to Edinburgh to see an old friend. We had a few beers and the following day I headed down to East Yorkshire.

I started to feel like things were going really well. My samples were being kept cool in ethanol, the car was running well, and there were no issues so far. It wasn’t until I arrived in Norwich a week later that I would experience my first major problem – which really couldn’t have been controlled or pre-empted.

I had driven to Kings Lynn, heading for a river at the bottom of some farmer’s fields – which was nothing unusual. I found the location and got ready as usual: throwing my waders on, connecting the buoyancy aid connected to my belt, and grabbing my net. As I started to walk down the road, out of nowhere a farmer’s truck drove past me with a carriage of cows. It didn’t faze me at the time: I just headed down the side path, eventually reaching the field with the cows and calves. I walked up to the fence, intending to climb the gate and walk across the field…when all of a sudden, the cows started marching over to me. I had a strange feeling they weren’t there to welcome me.

By the time I got to the fence, a large gang of protective female cows were gazing at me. I tried to spook them, but they wouldn’t budge: they simply grunted at me, looking quite angry. I thought, “No chance am I getting trampled by cows during field work! I will just go around, because there’s another field next door.” I started to walk around to the side, watching the cows follow me out of the corner of my eye. I jumped the fence and started to make my way through some bushes (and brambles), regretting this choice but at the same time pretty sure it was better than cows trampling my head.

But suddenly…squelch! My height dropped by about 2 feet: I had sunk. It turned out that the way I wasn’t meant to go was some sort of swamp or bog…either way, I was stuck. This had happened to me once before, on Cleethorpes mudflats as a young lad. That time, I had gone out in brand new trainers my mum specifically asked me not to ruin. I looked at the cows and thought, “Ha! Cows 2- me 0.”

At this point getting out was my main focus. I knew that when in mud like this, you need to expand your surface area in order not to sink. Unfortunately for me, this meant laying on my front and crawling out. I moved across the marshy land like a seal that had lost its way, until I finally made it out. At times like this, you either have to cry or laugh. I chose to laugh…until I left and realized that the cows were waiting for me like a trained animal retrieving a stick!

I will leave you with the image I saw at this point, and I’m sure you can guess what happened next…squelch!

Field work offers rewards and excitement no other work can sometimes……Let’s not forget the cows!

Arron is trained in field ecology, and has worked on a number of different research areas such as entomology, freshwater ecology, bat ecology, and the use of drones. He conducted an ecology and wildlife conservation degree at the University of Reading, went on to complete my masters by research in Entomology there also. He is currently working as a research assistant at the University of Reading and founder of a UAV consultancy called EcoDroneUK.