I always get super excited (likely as most biologists do) when plants or animals have crazy adaptations to deal with different environmental conditions. During a field course in the Yucatan Peninsula, Mexico, we witnessed lots of different adaptations. However, I was most excited about the mangrove forests.

Mangroves are salt tolerant trees that are adapted to the intertidal zone – essentially they are very salty swamps. Due to the high tides, roots often protrude out of the water to escape the low oxygen, water-logged mud. It gives a look of chaos with the roots all tangled among each other. However, despite the seemingly chaotic characteristic of the root system, the mangrove forests that we explored were very tranquil places. Many different species of birds carried on with their song overhead as crocodiles (yes we saw some and yes I was scared to go for a swim) and other aquatic species took refuge within the cavities that the roots formed. 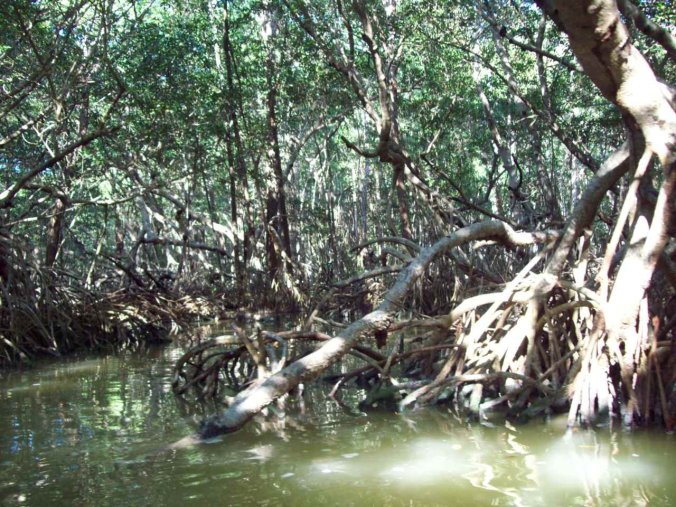 The chaos of mangrove roots

Not only are mangrove forests exposed to salt water during high tide, but as low tide occurs, the salinity increases even more. A lot of plant species cannot survive under these conditions. However, mangrove species have adapted to actually expel excess salt through their leaves. (I found this particularly cool as I studied tube-nosed seabirds that can expel salt through glands in their nose!).

During low tide, some areas can get very dry. One day, my group was exploring the mangroves looking for “edge habitat” (what our project was on). It was during low tide (perhaps had even been dry for weeks), so we were able to walk among the root system. The ground was all cracked from being dry for so long, reminding me of the type of “ground” you would see in Jurassic Park. As we were walking along, suddenly one of the girls in my group yelled “ah, help!”. We immediately rushed over thinking she had been bitten by something. Instead, we found her in the mud to her shins! It was like quicksand – the top was hard and crusty but underneath was waterlogged mud ready to engulf her legs. We didn’t want to get too close to her, afraid that we would also get stuck. Luckily, another group member was interested in catching snakes that day and was carrying along “snake tongs” that he was able to pull her out with. 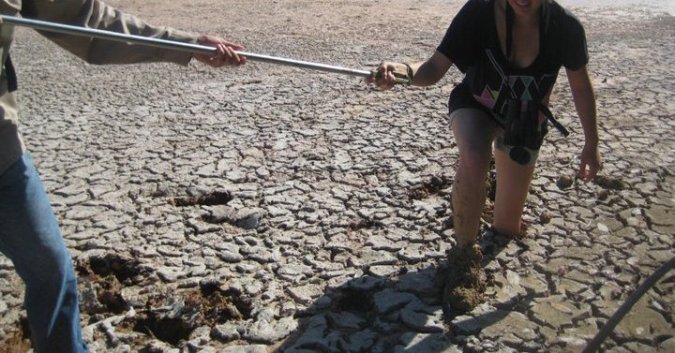 Exploring the mangrove forests was a really neat experience. It was a good reminder that although everything seems chaotic around you and you might get stuck, you will always be able to get out of it!

NB: I apologize if I used anyone’s photos in this post. We all shared photos at the end of the field course but I did not take note of whose photo was whose. If they are yours, please let me know and I will give you credit!

One thought on “Stuck in the mangroves”